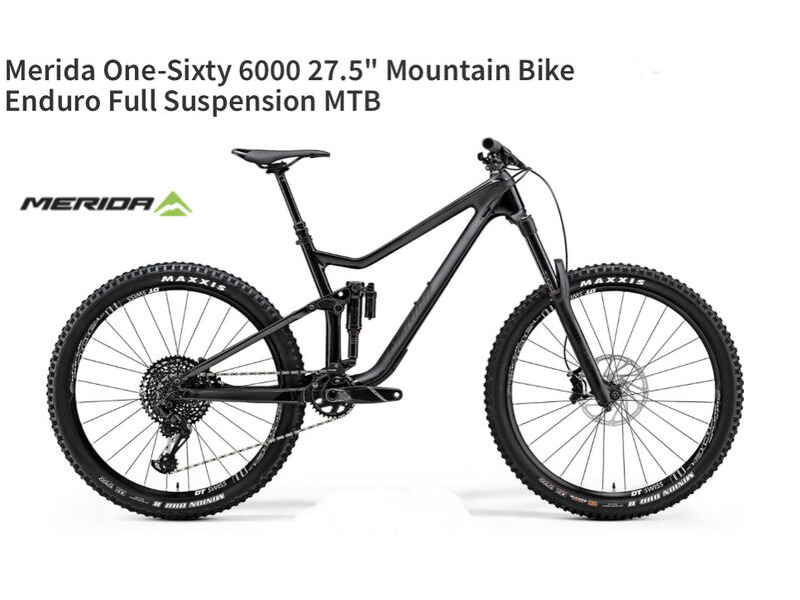 A slick enduro bike to smash mountain descents with, the Merida One-Sixty 6000 has a carbon and alloy full sus frame to take on challenging MTB trails. A lightweight carbon front triangle makes the One-Sixty a beaut to behold.

The CFA carbon has smooth lines and is built to take on tough terrain without worry. The rear triangle and upper link are made of 6016 alloy. The One-Sixty frame has internal routing to keep things neat, and Boost 12x148mm spacing in the rear, which increases tyres clearance and increases frame stiffness.

A RockShox Super Deluxe RCT shock in mounted in a trunnion format with bearings instead of bushings. This helps make the suspension movement much smoother and reduces friction. The shock controls the Float Link suspension, which holds the shock in a floating position between the upper link and the chainstays, creating a bike that feels like it has more travel than it does. The shock has rebound and compression adjustments, allowing you to fine tune your 165mm travel in the rear.

SRAM's 1x12 speed GX Eagle drivetrain gives the One-Sixty a hugely capable character, allowing it to conquer the steepest and longest climbs with little fuss. And on the way down, a pair of SRAM Code R disc brakes deliver downhill stopping performance to keep you in control at all times.

The One-Sixty 6000 rolls on DT Swiss Spline M1900 wheels. They are lightweight, yet give fantastic support, allowing the Maxxis DHR 2.3" tyres all the support they need for masses of traction. Get your target locked on the trail ahead with the capable Merida One-Sixty 6000.

As with any product, specification is subject to change without prior notification. You are advised to confirm current specification before buying.
We have placed cookies on your browsing device to enable this website to function correctly.
Further usage of this website indicates you are happy for us to do this..
Find out about the cookies we have set and how we use them.